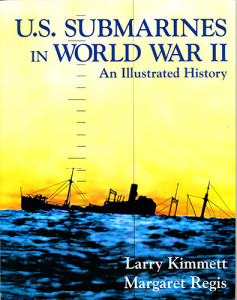 “U.S. SUBMARINES In WORLD WAR II” An Illustrated History. By Larry Kimmett and Margaret Regis. For more than sixty years the wartime secrecy surrounding U.S. submarines obscured their decisive role in the Allied victory in World War II over Japan. Submarines, comprising just 2% of the U.S. Navy, sank 55% of Japan’s merchant ships and one-third of its navy. Now U.S. Submarines in World War II brings to life this extraordinary American undersea campaign with maps, photographs, unique drawings, and web animations. From Pearl Harbor to Tokyo Bay this book provides a periscope’s view of the patrols, the losses, and the battles that broke the Japanese Empire and gave the United States the greatest naval victory in history. 1996 Softbound edition, a large book, measuring 11 inches tall, 8-1/2 inches wide. 159 pages packed full with black and white photos, maps and or illustrations on nearly every page. A complete list of every American submarine in World War II. Also includes a list of all museum boats and where they can be seen. Appendix and an index. Out of print and difficult to find. A must have for for your submarine / naval library.