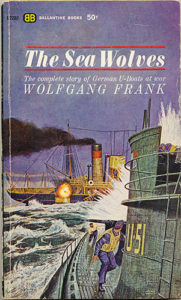 “The SEA WOLVES” The Complete Story of German U-Boats at War. By Wolfgang Frank. Foreword by Vice Admiral Leland P. Lovette, USN (Ret.). The complete and true story of the German U-Boat campaign during World War II. From the outbreak of the war in 1939 to the end in May of 1945. Author Frank follows the U-boats in their quest to win World War II for the Germans. The author was on the staff of Admiral Karl Doenitz and saw it all take place from the inside the Nazi empire. Paperback edition. 223 pages, 13 black and white photos, no maps or index.