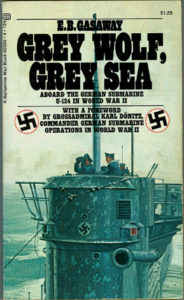 “GREY WOLF, GREY SEA” Aboard the German Submarine U-124 in World War II. By E. B. Gasaway. Foreword by Admiral Karl Doenitz. The war patrols of U-124. During World War II, Captain Johann Mohr became one of Germany’s top-scoring commanders as his U-124 sank 27 Allied ships totaling over 132,000 tons. In April 1943, Mohr and his entire crew were tragically lost, this is their true story. Based on official records and the recollections of those who served aboard the U-124—and managed to escape the last and fatal patrol. Never published (in the United States) in hardback and now difficult to find, this is an excellent book on U-124 and U-boat action in World War II. Ballantine 1970 first edition Paperback. 245 pages, with 14 black and white photos, no index. Later editions of this book were published without photos.