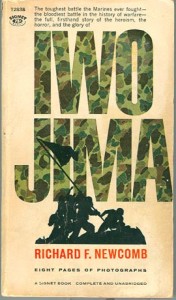 “IWO JIMA” By Richard F. Newcomb. Foreword by General H. Schmidt, USMC (Ret.). World War II’s bloodiest, most glorious Marine invasion. Some 5,000 American’s and about 20,000 Japanese defenders lost their life during this epic battle. February, 1945, the Allies hoped to take the tiny Pacific island in two-weeks––instead it took five! 30,000 U.S. Marines hurled themselves at 20,000 Japanese, holding what was perhaps the most heavily fortified positions in the history of warfare. Author Richard Newcomb tells this outstanding story of the epic battle for Iwo Jima. Perhaps one of the most complete books on this subject! Paperback edition. 254 pages, 20 black and white photos. A massive 27 page appendix, 4 maps and an index.