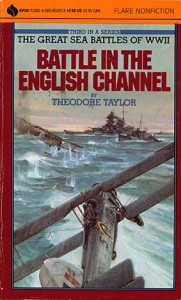 “BATTLE In The ENGLISH CHANNEL” By Theodore Taylor. Not since the Spanish armada of 1588 had an enemy dared to threaten the British empire from the narrow straits of the English Channel––not until Adolph Hitler. But the port of Brest at the westernmost point of France had become a German base, and three giant German war ships––the Scharnhort, Gneisenau and the Prinz Eugen were anchored there for repairs. Winston Churchill demanded that the infamous trio be “blown off the seas,” and RAF bombers crossed the English Channel nightly loaded with explosives in an attempt to do so. In December 1941, with the war expanding, Hitler demanded that the ships get out of Brest immediately and return to Germany. The escape route: A daring run up the English Channel. Surrounded by destroyers and torpedo boats, with fighter planes circling overhead, the Scharnhorst, Gnisenau and Prinz Eugen prepared to make their way through the mine-infested waters of the channel… right under the nose of the British. 1983 first edition Paperback. 141 pages, 10 illustrations, 1 map, and an index, no photos.