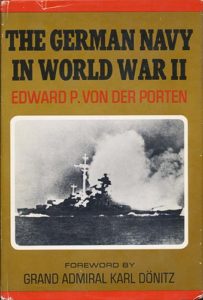 “The GERMAN NAVY In WORLD WAR TWO” By Edward P. Von der Porten. With a Foreword by Grand Admiral Karl Doenitz. From the early days before World War II when the German navy was re-arming with their impressive battleships such as Bismarck and Turpitz this book tells the complete story. And naturally no book on the German navy in World War II would be complete without the heroic story of the U-boats. Here in one book you’ll find the complete and true story, the U-boats, battleships and more––out-manned, out-gunned and pitted against impossible odds the German navy battled the Allies from 1939 to 1945. 1969 Hardback edition, with dust jacket. 274 pages, 40 black and white photos, 6 maps, epilogue, bibliography, appendix and index.

Edward P. Von der Porten received his B.A. (Bachelor of Arts) and M.A. (Master of Arts) degrees from San Francisco State College, where he majored in history and specialized in maritime history. He went on to become an instructor at Santa Rosa Junior College and a teacher of history and journalism at Santa Rosa High School in California. Von der Porten has interviewed and corresponded with many of the German leaders covered in this book.