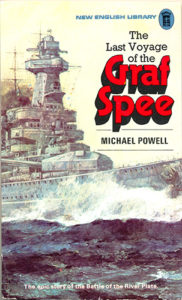 “The LAST VOYAGE Of The GRAF SPEE” By Michael Powell. Along with the Bismarck, the German battleship Admiral Graf Spee was one of the most famous warships of World War II.  In 1939, at the outbreak of war she was sent into the Atlantic where she sank nine Allied merchant ships totaling some 50,000 tons. Numerous British hunting groups were quickly assigned to find and sink the mighty vessel. The Battle of River Plate ensued, during which the Graf Spee was badly damaged by the HMS Ajax and HMNZS Achilles. Now on the run, the Graf Spee docked for repairs in the neutral port of Montevideo, but was forced by international law to leave within 72 hours. Faced with what he believed to be overwhelming odds, German Captain Hans Langsdorff decided to scuttled his ship rather than risk the lives of his crew. A ruse by British intelligence encouraged the captain to “think” he was out-numbered, with aircraft carriers and battleships on their way and his escape route was surely cut off. Paperback edition. 192 pages, no photos, maps or index.