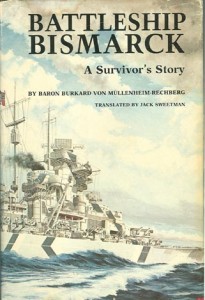 “BATTLESHIP BISMARCK” A Survivor’s Story. By Baron Burkard Von Mullenheim-Rechberg. Even on the drawing board, the Bismarck was a grimly spectacular battleship—a massive floating gun platform, heavily armored and secretly exceeding the tonnage limitations set by international treaty. In her first engagement, after firing for only six minutes, she sank the HMS Hood, once the largest warship in the world and the pride of the Royal Navy. The Royal Navy quickly sought to avenge that tragic loss. The drama of her short life and violent end made Bismarck a household name during World War II and the subject of considerable literature thereafter. Not until now has her inside story been told. Baron von Mullenheim-Rechberg, today the only surviving officer of the Bismarck and the senior survivor at the time of her sinking, has filled the gap. The factual and riveting chronicle that he has painstakingly assembled will stand out from among the stories of naval war. Having been ordered to the Bismarck before she was commissioned, the Baron served in her throughout her career. When he reported aboard, he was assigned as personal adjutant to her captain, Ernst Lindemann, and consequently is in a position to furnish a unique view not only of the personality of that brilliant officer but also of all that went into making the ship combat-ready. The arrival of her enthusiastic young crew, her sea trials, plans for her first mission, and the awkward visit aboard of Adolf Hitler are all related with eyewitness reality. The pace of the narrative quickens and the reader is caught up in the tension of the Bismarck’s first and last mission, Exercise Rhine. Here are the needless security breaches, the alarm bells when icebergs were mistaken for enemy vessels, the first encounter in the fog with the stalking British cruisers Suffolk and Norfolk, and the sudden sinking of the massive HMS Hood. But triumph soon turns to tragedy as every British warship in the Atlantic is deployed against the Bismarck and, wounded, she tries to make a dash for the coast of France. Lost opportunities, garbled messages, faulty intelligence, and a lucky British aerial sighting lengthen the shadow of doom for the giant battleship as a torpedo dropped by a British Swordfish biplane jams her rudder and leaves her helpless to maneuver away from a course that leads towards her enemy. Frantic but unavailing attempts at repair finally have to be abandoned and her crew has no choice but to wait for the end. Her proud men regarded the Bismarck as “floating life insurance”—yet more than 2,000 of them met death when her end came. Her captain was not among the handful who were saved. This remarkable book, in which the author attempts to put himself in the position of the Fleet Commander, provides interesting strategic insights. 1980 Hardback (Book Club) edition, with dust jacket. Prior owners name appears on the title page of the book. 271 pages, 64 black and white photos, 3 maps. Appendix and an index. Large maps inside front and back covers.