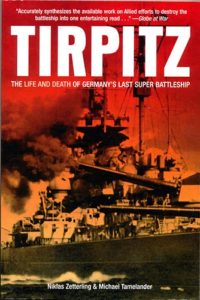 “TIRPITZ: The Life and Death of Germany’s Last Super Battleship” By Niklas Zetterling and Michael Tamelander. The German battleship Tirpitz was the second of two Bismarck-class battleships built for Nazi Germany’s Kriegsmarine (navy) during World War II. Like her sister ship Bismarck, Tirpitz was armed with a main battery of eight 15 inch guns in four twin turrets. After the Royal Navy took out the German battleship Bismarck in May of 1941, they still had her twin sister the Tirpitz to contend with. For the next three and a half years the Allies launched a variety of attacks to remove Germany’s last capital ship, believed to still be a serious surface threat. The authors of this book have woven Tirpitz’s story quite well and in doing so explain the strategic implications and dramatic battles surrounding this super battleship. The book is an excellent study of an aspect of naval strategy the German’s used. New softbound book. 360 pages, maps, black and white photos with an appendix, no index .