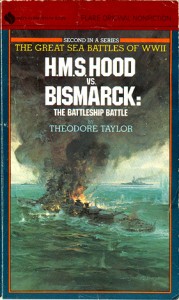 “H.M.S. HOOD Vs. BISMARCK” The Battleship Battle. By Theodore Taylor. World War II, May 1941, Britain was now fighting for her survival on the high seas, which she had ruled unchallenged for centuries. Now the scales were tipped against the British for the German’s had launched their newest weapon, a masterpiece of naval construction––the mighty and powerful battleship Bismarck. Almost equal in power, Britain’s HMS Hood will speed to meet her enemy escorted by a flotilla of deadly war machines. Near Greenland, in ice-covered waters, these two monsters of the sea will emerge from inside dense fog to begin the most astonishing naval battle of all time. On May 24, the two dreadnaughts, Hood and Bismarck engaged one another in a mighty battleship versus battleship shoot-out. Hood quickly took several direct hits from Bismarck and sank within minutes! Here is the true story of this epic battle in the cold Atlantic ocean. 1982 first edition Paperback, 135 pages, 9 illustrations, 2 maps, and an index, no photos. Former library book with part of the glued pocket removed from inside front cover, otherwise this book is in good condition.