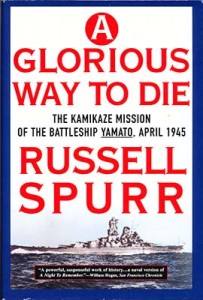 “A GLORIOUS Way To DIE” The Kamikaze Mission of the Battleship Yamato, April 1945. By Russell Spurr. The Yamato was the biggest and most powerful battleship ever built. Assembled in intense secrecy at a specially prepared dock to hide her construction, the massive 72,000-ton Japanese warship was commissioned in December 1941, just over a week after the start of the Pacific war. Yamato housed nine, 18-inch guns in three giant turrets. She could fire 3,200 pound armor piercing shells, out-gunning even America’s best; the Iowa-class battleships. Yamato’s armor protection was also unsurpassed. With a crew of 2,700 men and just over 862 feet long, the battlewagon quickly became the pride of the Imperial Japanese Navy—and a top priority target for the U.S. Navy. She was torpedoed by the American submarine USS Skate (SS-305) in December 1943 but failed to sink. At the Battle of Leyte Gulf in October 1944, Yamato unleashed her big guns in an engagement with U.S. escort carriers and destroyers off the island of Samar. As the Pacific war pushed on to conclusion, the Japanese sent Yamato on a one-way kamikaze mission in April 1945. Yamato was to hurl herself at the invading Allied vessels at Okinawa and destroy as many ships as possible. Russell Spurr tells the true story of the mightiest battleship to ever go to sea, from Yamato’s launching to the disastrous sinking at the hands of the Allies in 1945. Of about 3,300 crew members, only 276 survived the sinking. Hardback edition with dust jacket. 341 pages with 37 historic black and white photos, maps, 2 diagrams of Yamato and index. Prior owners name inside the front cover.

“This is a wonderful book which reconstructs the last mission of the super-battleship Yamato with great clarity and attention to detail. Spurr has also devoted many pages to the collateral action taking place after the US landings on Okinawa, like the kamikaze strikes against the US naval armada and the futile trials of Japanese submarines to hit the invaders. The air strikes against the Yamato and its group of accompanying ships are perfectly explained along with details of all the possible hits attained against the battleship. The author interviewed many Yamato survivors and these men revealed also some annoying piece of information: after the battleship’s demise, US fliers made low firing passes against the Japanese survivors, a nasty gesture surely for a gallant foe. I really enjoyed the chapter where Spurr presents admiral Mitscher’s tactical dilemma and the way he chose to solve it. A very nice book about a forgotten episode of the Pacific War.” – Dimitrios

“The Yamato Battleship is one of those topics that never ceases to attract interest. Like the German Bismark, this ship was a victory of propaganda, pride of the nation and as such, too risky to loose. So many resources were put into this massive project from such a small nation as Japan. It was a technological masterpiece. The largest battleship ever built, the Yamato only fired its massive 18” guns once in anger, during the battle of the Philippine Sea—a battle which the Japanese almost won, but snatched a loss from the jaws of victory. The last voyage of the Yamato was a suicide trip, a desperate measure from a nation desperate to delay the inevitable loss of the war. At the time it was built, neither the Japanese nor the US Navies realized that the Aircraft Carriers would be the decisive ships of the war. I highly recommend this book because it gives the story from the Japanese perspective. Everyone knew it was a suicide trip, yet all were committed to die with honor for their Emperor. It is important to read and understand the other side’s view of what happened in history, and this book does just that. This is not a book for those seeking technical information about the Yamato, but rather creates a “you-were-there” picture.” – Cpt Matt