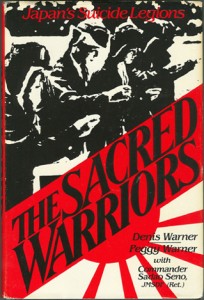 “The SACRED WARRIORS” Japan’s Suicide Legions. By Denis Warner and Peggy Warner with Commander Sadao Seno JAMSDF (Ret.). Imperial Japan had become a shogunate dominated by the ancient samurai code of honor––that it is better to die than to surrender. And during World War II only Japan would try to stave off defeat by creating a fanatical suicide squad known as the “Divine Wind.” Author Denis Warner, a war correspondent aboard a ship that suffered two kamikaze onslaughts, and Commander Sadao Seno, assigned to command a midget submarine toward the Pacific war, bring to life this fascinating, behind-the-scene account of Japan’s “special attack forces.” They tell the story of Admiral Onishi, a drinker and gambler who found himself directing young pilots to certain death; Lieutenant Seki, obedient and loyal but filled with torment, who blazed Onishi’s suicide trail in the sky; Commander Zenji Orita, who launched the first manned torpedo (called Kaiten’s) on its path to destruction; and many others who thought death a small price to pay for the glory of Japan. Events are vividly retold through interviews with veterans from both sides, including those who launched kamikaze attacks and those who survived them. 1982 Hardback with dust jacket. 370 pages, 26 black and white photographs, 4 maps, 2 diagrams, 17 page appendix and an index. Rare and hard to find!