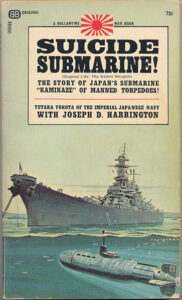 “Suicide Submarine” The Story of Japan’s Submarine “Kamikaze” of Manned Torpedoes!  By Yutaka Yokota (a former Petty Officer in the Imperial Japanese Navy) with Joseph D. Harrington. The true story of Japan’s suicide torpedo pilot’s who manned the Kaiten––the underwater counterpart of the deadly and fanatic Kamikaze’s of the sky. These World War II Japanese submarines were so secret, few people, even in Japan knew of their existence. Each Kaiten was fired or launched from a larger submarine, then guided to their target by a human pilot, who gave his life in an attempt to sink an American warship. Author Yutaka Yokota trained as a fighter pilot but transferred to the suicide submarines. He gives the full background of the Kaiten torpedo, its technical details and combat record, and the gripping human drama of the men who volunteered to fight and die in the most bizarre and fanatical combat group in the history of the war. Originally titled “The Kaiten Weapon.” 1968 Paperback edition. 256 pages, 12 black and white photos, no index.