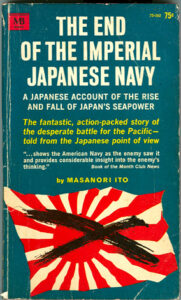 “The END Of The IMPERIAL JAPANESE NAVY” An Insiders Gripping Account of Strategy And Sacrifice. By Masanori Ito with Roger Pineau. The Imperial Japanese Navy: for centuries it had never been defeated. Yet after four years of naval warfare against the United States it simply no longer existed, having lost more than 400,000 men, its great carriers and massive battleships, most now resting on the ocean floor––sunken wrecks. Now, one of Japan’s leading military commentator’s takes us inside the hearts and minds of the Japanese naval commanders, many of whom he knew personally, to reveal a world of indomitable courage, rivalry, and fatal overconfidence. Masanori Ito’s dramatic account offers a rare glimpse into Japanese naval warfare in the Pacific. From the devastating attack on Pearl Harbor in 1941 to the last bloody sorties as American forces closed in on the main islands of Japan in 1945. Paperback edition, 192 pages, maps, diagrams and an index. No photos.