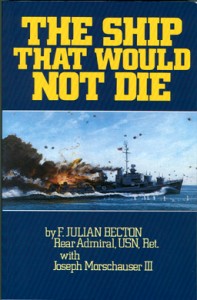 “The SHIP That WOULD NOT DIE” By Rear Admiral F. Julian Becton, USN (Ret.) with Joseph Morschauser III. Frederick Julian Becton was the commanding officer aboard the American destroyer USS Laffey (DD-724). Commissioned in February 1944, Laffey was quickly placed in harms way. Her first action in World War II was during the Allied invasion of France. Laffey took her position off the coast of Normandy for the famed D-Day invasion of June 6, 1944.

In 1945 Becton and his USS Laffey had steamed half a world away, now taking part in the Pacific war against the Japanese. Stationed as a radar picket ship off the island of Okinawa, on April 16, 1945, all hell broke loose when the little tin can fought for 80 horrifying minutes against 22 Japanese kamikaze planes and bombers. Although the ship’s gunners downed many incoming aircraft, seven suicide planes managed to crash into the hapless vessel. The attacks killed 32 sailors and wounded 71 more, but despite fires, smashed and inoperable guns, and a jammed rudder––Laffey somehow managed to survive. Commander Becton, never gave up and miraculously saving his damaged ship. Becton became famous for his reply to an officer asking him whether they would have to abandon Laffey stating; “We still have guns that can shoot. I’ll never abandon ship as long as a gun will fire!” He continued to serve in the U.S. Navy after World War II and reached the rank of Rear Admiral. The USS Laffey received a Presidential Unit Citation and following her survival off Okinawa the destroyer was nickname “The Ship That Would Not Die.” This excellent book gives the remarkable story of why the American public considered this World War II destroyer a hero ship. Today the USS Laffey is currently a museum ship, anchored at Patriot’s Point in Charleston, South Carolina. New Softbound edition, 295 pages, 27 black and white photographs, 2 maps, a copy of the ships’ Presidential Unit Citation, a USS Laffey crew roster and an index.

“Off Okinawa the Laffey fought off the greatest kamikaze attack in naval history with 22 planes waiting to fireball into her… These chapters burst with action.” – Kirkus Reviews

“The saga of Laffey is far more than just another sea story. I urge every sailor… and every American proud of this country and its heritage to read this true and exciting story.” – Admiral Thomas Moorer, USN (Ret.) Former Chairman of the Joint Chiefs of Staff

“The book is interesting, gripping and a war story at its best.” – The San Diego Union

“The ship and her men suffered the most intensive Japanese Kamikaze air attack ever hurled on one ship. The reader relives the ship’s missions: rescuing downed airmen, her active fighting in the Normandy Invasion; her part in freeing the Philippines and the devastating assault on Iwo Jima.” – The Birmingham News

Frederick Julian Becton was born in 1908 in Des Arc, Arkansas. After graduation from the United States Naval Academy in 1931, Becton served on the battleships USS Texas (BB-35), and USS Arkansas (BB-33), before moving to destroyers. He was the Executive Officer and later the Commander Officer on the famed USS Aaron Ward (DD-132 ). In late 1943 Becton became the first Commanding Officer aboard the nearly-completed USS Laffey (DD-724). In the Pacific in 1945, the destroyer narrowly survived countless attacks from Japanese kamikazes. For his heroic actions off Okinawa the Commander was awarded the Navy Cross. Following World War II, in 1951 Becton was promoted to the rank of Captain and eventually took command of the mighty battleship USS Iowa (BB-61). It was his final duty at sea. In 1959 Becton was advanced to Rear Admiral and assigned to the Bureau of Naval Personnel and other posts. When he retired in 1966, he went on to write the book “The Ship That Would Not Die.”

Rear Admiral Frederick J. Becton passed away on Christmas Eve, December 24, 1995 in Wynnewood, Pennsylvania, he was 87 years old. Becton’s naval decorations include the Navy Cross, the Silver Star Medal with three additional Gold Stars in lieu of a second, third and fourth awards, a Commendation Ribbon with a Star in lieu of a second award. The Croix de Guerre with Gold Star, and the Pacific Ribbon with seven stars.