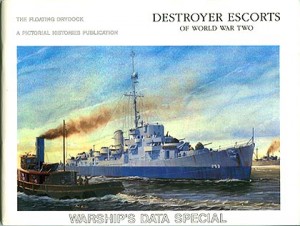 “DESTROYER ESCORTS Of WORLD WAR TWO” Warship’s Data Special. By Robert F. Sumrall. The American Destroyer Escorts (or DE) proved to be extremely effective and highly adaptable for services far beyond their original purpose in World War II. In the Pacific, the DEs fought against superior Japanese warships at Samar and Leyte Gulf (in 1944). They served on the dangerous Okinawa radar picket line in 1945 with 22 of these 50 ships being damaged by Kamikaze attacks. Against the German’s they saw action in the Atlantic and in the Normandy invasion of 1944. Some 28 German U-boats were sunk by aggressive destroyer escorts crews. In this impressive new book Robert Sumrall tells the history of these famous ships. Listing all DEs by name and hull number beginning with DE-5 concluding at DE-540. Information on each class with commission and decommission date or final fate on every DE. Seventy-five photos from nearly every imaginable angle. Some of the interesting technical areas include; ordnance, directors and electronics (radar and sonar), hull camouflage and much more. A must-have for anyone interested in these historic U.S. warships. The middle section includes a large double-page fold-out. New 8 1/2 X 11 book, 48 pages, 75 black and white photos, 9 color photos and 16 diagrams.

Robert F. Sumrall is a retired Chief Petty Officer with over thirty-six years of service in the United States Navy. He has an extensive background in naval architecture and marine engineering. Sumrall is the author of Sumrall is the author of “Destroyer Escorts Of World War Two” and “USS Bowfin (SS-287).” He has also written and illustrated a number of articles for the U.S. Naval Institute Proceedings and other naval periodicals. The Curator of Ship Models at the U.S. Naval Academy Museum since 1970 Sumrall is himself a professional ship model builder and widely known for both his sailing and steel navy models.