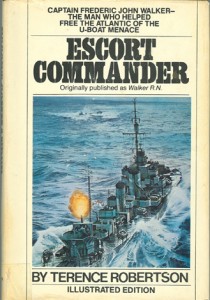 “ESCORT COMMANDER” By Terence Robertson. Foreword by Admiral Sir Alexander Madden, KCB, CBE, RN. For four long years German submarines preyed on Allied shipping in the Atlantic. When at last the tide of World War II began to turn, one man stood above all others at victory’s helm, heroically blasting the hated U-boats out of the seas. That man was British Captain Frederic J. Walker. His strategy was to go on the offensive, flushing out the hidden subs. This is the true story of Captain Walker and his aggressive tactics on Germany’s U-boats. Escort ships under Walker’s command sank 21 German subs. Tragically Walker died of a stroke before the end of World War II, on July 9, 1944; he was just 48 years old. 1979 Hardback (book club) edition with color dust jacket. 202 pages, packed with illustrations, no photos, maps or index.