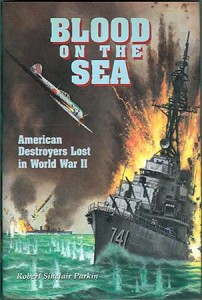 “BLOOD On The SEA” American Destroyers Lost in World War II. By Robert Sinclair Parkin. Seventy-one (71) U.S. destroyers were lost in World War II. In chronological order (by date of ship loss) “Blood on the Sea” describes each and every one of these destroyers and takes the reader on their last mission. Each chapter of the book tells the story of another tragic loss of an American tin can in World War II (Atlantic and the Pacific). From 1941 to 1945, lurking enemy submarines could deliver death in an instant to an unsuspecting surface vessel. In the South Pacific, huge Japanese battle fleets sallied to vie for control of that massive ocean, and a destroyer could suddenly find itself swarmed by enemy aircraft, or encounter a long-range cruiser. Off Europe, within range of the German Luftwaffe, no ship could be considered safe. And in the Atlantic, destroyers were often left alone to battle the dreaded Nazi U-boats. Very unique book and the only known of its kind. Hardback edition with dust jacket. 360 pages, 59 black and white photos with 3 maps an appendix and index. Now out of print.

Blood On The Sea – hardback edition

Blood On The Sea – softbound edition