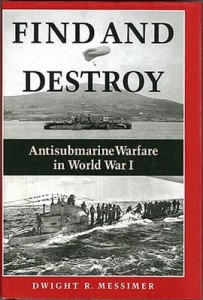 “FIND And DESTROY” Antisubmarine Warfare in World War I. By Dwight R. Messimer. World War I was the crucible of anti-submarine warfare (ASW), and the years of trial and error between 1914 and 1918 gave rise to the weapons and tactics used by today’s ASW forces. With this study, military historian Dwight Messimer examines the weapons, tactics, and organization used by all the belligerents during the war and provides some surprising findings. Because he draws heavily from personal accounts as well as from official records, his book will appeal to both serious readers seeking hard facts and to general readers who like stories about war at sea. Messimer tells the story from both sides. German survivors who escaped from sunken U-boats explain what it was like to face the newly developed ASW weapons beneath the surface, and pilots tell what it was like from above. The author describes the German’s well-organized and efficient ASW organization in the Baltic and the Helgoland Bight. He also discusses the weapons developed during the war that proved to be largely ineffective or outright failures. While his evaluations of the contributions made by aircraft and Q-ships put them in the category of only marginally effective, his analysis of the effectiveness of politics deems that ASW “weapon” the most effective of all. Solidly grounded in the best primary sources available in England, the United States, and Germany, this book is the first to address the ASW of all World War I belligerents. New Hardback with dust jacket. 298 pages, 25 black and white photographs, 13 maps, 6 diagrams, an appendix and index. Retail $39.95 save $20

Dwight R. Messimer is a lecturer in military history at San Jose State University in California, where he specializes in World War I and early U.S. aviation. He is the author of six books including “The Merchant U-Boat” and “Escape,” the story of World War I Medal of Honor recipient Edouard V. Isaac. Messimer served in the U.S. Army from 1954 to 1962 and was stationed in Berlin from 1957 to 1959. After being discharged, he served with the San Jose Police Department for twenty-two years and completed a graduate degree in history before beginning a career in teaching. Dwight and his wife live in Mountain View, California.