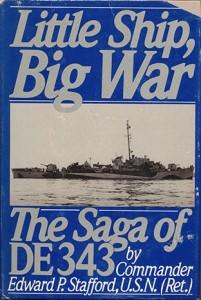 “LITTLE SHIP BIG WAR” The Saga of DE-343 By Edward P. Stafford. The true story of the destroyer escort USS Abercrombie (DE-343) in World War II. The author Commander Edward P. Stafford was a lieutenant and later the executive officer aboard the little DE. Here is the story of Abercrombie from the time her keel was laid in Orange, Texas, until her decommissioning after the war, in San Francisco, California. The ship saw action in the Pacific during World War II, fighting the Japanese from the Battle of the Philippine Sea to the signing of the peace treaty in Japan in 1945. Abercrombie did it all; attacking and sinking Japanese submarines, picking up downed pilots, riding out a terrible typhoon and battling the dreaded Japanese kamikazes suicide pilots off the island of Okinawa. The importance of destroyer escorts has been largely overlooked by naval historians, who seem to concentrate on the more glamorous battleships and carriers of World War II. But here, Stafford chronicles the epic history of his own USS Abercrombie—an excellent history of a DE from start to finish. Commander Stafford also wrote “The Big ‘E.” This Hardback is also a Book Club edition with dust jacket. As noted in the above photo, upper corner of the dust jacket is clipped. Also has shelf wear to the DJ. 332 pages, 11 black and white photographs, and an index.