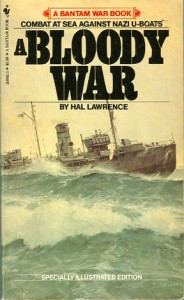 “A BLOODY WAR” Combat At Sea Against Nazi U-Boats. By Hal Lawrence. The Royal Canadian Navy was on the front line of the Allied sea war, pitted against the German Navy’s most devastating war machine—the U-boat. Here are the incredible sights and sounds of that bloody war as recorded by Lieutenant Hal Lawrence, awarded the Distinguished Service Cross for gallant and courageous action in close contact with the enemy. Experience with him the terrifying explosions of torpedo after torpedo ripping into his ships’ vitals, the burning escort ships glowing red on the horizon, the wreckage and desperate men littering the cold North Atlantic waters. Listen to the agony of ships colliding and men dying. From the sea war’s first rattle of machine gun fire to the stunning Allied invasion at Normandy in 1944. This is World War II as the men who fought and died there saw it. 1982 Paperback, 225 pages, countless illustrations, 1 map, no photos or index.