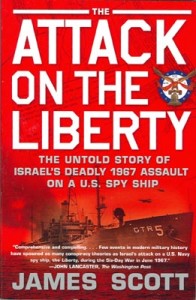 “The ATTACK On The LIBERTY” The Untold Story of Israel’s Deadly 1967 Assault On A U.S. Spy Ship. By James Scott. On June 8, 1967, as war raged between Israel and its neighbors, an American spy ship, the USS Liberty (AGTR-5), eavesdropped on communications off the coast of Egypt. When Israeli fighter jets flew overhead, the Liberty’s crew assumed that the ship’s identifying markings and American flag would be visible to the pilots in the clear skies above. After several passes over a period of hours, the jets suddenly opened fire and began strafing and napalming the deck of the Liberty, which had minimal defenses. When the air attack ended, Israeli torpedo boats appeared and scored a direct hit. By the time the assault was over, 34 American crewmen had been killed and 171-two-thirds of the crew, seriously injured. Only heroic efforts by the crew saved the ship from sinking. Back in Washington, news of the attack on the Liberty was received with a mixture of shock and outrage. Many in the Pentagon and in Congress demanded that Israel be held accountable for the unprovoked attack in international waters. The Johnson administration initially responded by threatening Israel but soon softened its attitude. Israel’s stunning victory in the Six-Day War, as it became known, was a source of pride to many American Jews, and their support was crucial to an administration mired in an increasingly unpopular war in Vietnam. With the death toll mounting daily in Vietnam, the attack on the Liberty was pushed to the back pages of the nation’s newspapers and ultimately all but forgotten. James Scott is a journalist and the son of a surviving Liberty officer. In this riveting book, he recounts the story of the horrifying attack and the tremendous impact it had on the lives of the crew. He puts the attack in context, showing how political considerations trumped the demands for justice from the survivors and their supporters in the military and in Congress. Drawing on new interviews and recently declassified documents, he demonstrates that Israel’s initial insistence that the attack was a mistake caused by misidentification of the ship is implausible. Scott documents, for the first time, the fact that the ship was correctly identified by at least one of the pilots prior to the attacks. His descriptions of the crew under fire and their frantic work to save the ship are dramatic and unforgettable. Scott takes readers into the conference rooms at the White House where the most senior officials in the government debated how to respond to the attack and then eventually devised a plan to protect Israel from public outrage. The Attack on the Liberty is the finest account yet of this tragedy and a remarkable tale of men under fire in an incident that remains bitterly disputed after more than forty years. New Softbound edition. 374 pages with 22 black and white photographs and an index. No maps.

“I, Gary W Brummett, surviving crewman of USS Liberty & former President of the USS Liberty Veterans Association do highly recommend The Attack on the Liberty by James Scott to be the most authoritative and well researched book to date. I would recommend anyone interested in the history of this country and this event read and pass the book around and recommend it to any and all civic, military or any other organization interested in the truth. I want to thank James Scott for a wonderful book. Job well done, James!” – Gary W. Brummett a USS Liberty survivor

“I was Officer of the Deck when the Israeli Defense Forces attacked our ship, the USS Liberty (AGTR-5), without warning. I have read James Scott’s riveting account of the attack and can vouch for it’s historical accuracy. A fine piece of Investigative Journalism.” – Lloyd C. Painter US Secret Service (retired)

“I appreciated the journalistic style in which this book was written. Any fact that was not confirmed, or verifiable, by the author, was not included. This makes it an excellent “primer” on this not very well known historic tragedy. No conjecture. No conspiracy theories. However, with that said, this book implies that there are very many unanswered questions. The author quotes dozens upon dozens of senior military officials, contemporary-to-the-event administration officials, U.S. Ambassadors stationed at many foreign countries at the time of this travesty, who all state basically the same thing; “The Israeli story of this event is hogwash.” All individuals who attempt to criticize the Israeli story are immediately branded “anti-semitic,” “anti-Zionist,” or at least, disliking Israel for some unknown reason. But the truth may involve U.S. complicity. As the son of a career U.S. sailor, brother of a U.S. sailor, and an honorably discharged veteran of the U.S. Navy myself, I would hope that my patriotism is above suspicion. This book does not pose the controversial questions, but merely suggests that the facts, as presented by both the U.S and Israel, raises many questions, that remain unanswered to the inquiring mind. Some miscellaneous facts: The U.S. rescue efforts, (after the air attack, and before the torpedo boat attack) were woefully inadequate. Launch orders for our fighter response, were delayed. Launch orders were not logged. Slow-moving, A1 propeller-driven, ground support aircraft were launched to counter supersonic French Mirage fighters. Multiple flights were launched and recalled. (this ex-sailor believes that any officer who obeyed the recall order, was guilty of obeying an illegal order, and should have been court-martialed, and be required to spend the rest of there natural lives in prison. Men died, for the sake of the pilot’s future advancement, or their cowardice.) Read this book first, then order the other half-dozen or so books on this subject. The other books offer numerous, plausible explanations, on why the brave crew of the U.S.S. Liberty may have been, quite literally, sacrificed to advance the political ambitions of a misguided Middle Eastern foreign policy, during the Cold War.” – Gary McWhorter