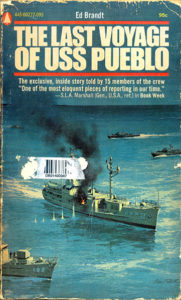 “The LAST VOYAGE Of USS PUEBLO” By Ed Brandt. The affair of the USS Pueblo (AKL-44), the American ‘spy ship’, its Commander Lloyd Bucher, its crew and the Navy brass that sent it on its ill-fated mission in 1968––all this lives on in controversy. This is the book that tells it from the standpoint of the men in the crew. Pueblo and her crew were captured by the North Koreans in 1968, despite the fact the American vessel was operating in international waters. The North Koreans boarded the ship and took her to the port at Wonsan. For the next 11 months, Commander Bucher and his crew were held as POWs by the North Koreans, and were starved and tortured during this time. Bucher, was tortured and put through a mock firing squad in an effort to make him confess. Eventually in December 1968 the North Korean government release the 82 remaining crew members. Here is the true story of this historic event. 1969 Paperback edition with 288 pages. Includes the crew roster and an index. No photos or maps. Note book cover condition above.