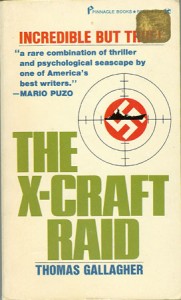 “The X-CRAFT RAID” By Thomas Gallagher. It was an impossible mission. The Nazi battleship Tirpitz was the mightiest naval vessel in all of Europe. In the Atlantic she was a major menace to Allied shipping and had nearly bottled up the British fleet, preventing many of their battleships and carriers from leaving home port. All previous attempts to destroy the Tirpitz had failed—now a new weapon was needed. The result was the X-craft, or the midget submarine, and a secret mission against a German battleship that was a thousand times the X-craft’s size. Here is the whole incredible, true story of an impossible World War II sea mission. A story of courage and daring, the suspenseful account of adventure so gripping that its difficult to believe it all really happened! Paperback edition, 188 pages, with 2 maps, and an index, no photos.