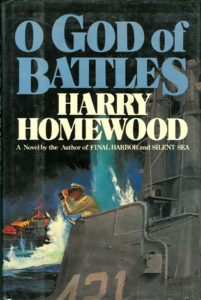 “O GOD Of BATTLES” By Harry Homewood. (Fiction) Author Homewood made eleven patrols in American subs during World War II and wrote “Final Harbor,” “Torpedo!” and “Silent Sea.” Homewood turned out another outstanding WWII submarine novel. The fictional USS Tigerfish swings into action against the Imperial Japanese Navy. The narrative sweeps through momentous events in WWII history, from the dismal defeat at Pearl Harbor through the bitter submarine and air war in the Pacific and on to victory. This is an epic tale written with the true flair that only a combat submarine veteran can provide. Rare 1983 Hardback edition with dust jacket, 359 pages, no photos, diagrams or maps.