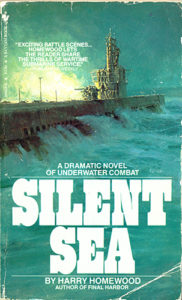 “SILENT SEA” By Harry Homewood. (Fiction) Homewood made eleven patrols in American subs during World War II. Author of “Final Harbor” and “O God of Battles” this is yet another brilliant Homewood World War II submarine novel. On the fictional fleet submarine USS Eelfish, Captain Mike Brannon and his brash young crew were destined to become the fiercest undersea warriors of World War II. In the Pacific, their daring and determination were stretched to the limits. This is the vivid, thrilling story of their exploits––and their life and death struggle against a cunning, formidable foe. Bantam Paperback edition. 276 pages, no photos, maps or index. Long out of print, this is becoming a difficult book to find!