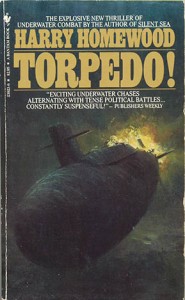 “TORPEDO!” By Harry Homewood. (Fiction) Author Homewood made eleven patrols in American subs during World War II. Author of “O God Of Battles” and “Silent Sea.” Apocalypse under the sea. Sleek and deadly, the ultra-silent Soviet missile swept through the black ocean depths––its target was the American nuclear submarine, USS Sharkfin. The lives of the lost Sharkfin demanded vengeance and on the brink of World War III, Mike Brannon gave the order––“Seek and destroy!” Another great Homewood submarine novel. Bantam Paperback edition. 213 pages, no photos, maps or index.