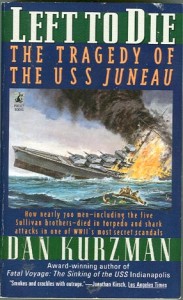 “LEFT To DIE” The tragedy of the USS Juneau. By Dan Kurzman. The full story behind one of the U.S. Navy’s most devastating tragedies and one of its most shameful cover-ups. The cruiser USS Juneau (CL-52) is torpedoed and sunk by the Japanese submarine I-26 in November 1942. In the tragic sinking and its terrible aftermath nearly 700 American sailors including the five Sullivan brothers died. Shark attacks account for many of the losses. One of World War II’s most disastrous sinkings––a true yet touching story. A great book and an excellent read––a story you will not forget! From the award-winning author of “Fatal Voyage” Dan Kurzman. Paperback edition, 339 pages, 26 black and white photos. Large 28 page appendix includes a USS Juneau crew roster and an index. Now out of print. 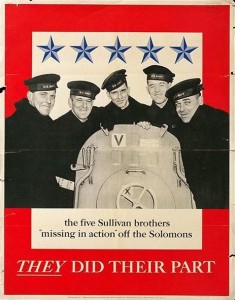