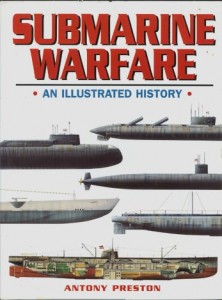 “SUBMARINE WARFARE” An Illustrated History. By Anthony Preston. The submarine has revolutionized naval warfare. These underwater vessels, have progressed from crude, steam-driven craft of the American Civil War to silent nuclear submarines which can cruise submerged for months without surfacing, and can carry intercontinental missiles mounting multiple nuclear warheads. “Submarine Warfare” traces the entire history of these vessels, starting with the earliest submersible which were hand-propelled. It was in World War I that the submarine proved itself to be a potentially war-winning weapon. This book charts the grim battle of attrition which was waged under the waves by German U-boats and Allied submarines alike. The book then moves on to World War II and the submarine war waged by German, Japanese, British and American forces. The final chapters deals with the modern nuclear submarines of today. 1998 Hardback edition with dust jacket. A large 11 1/2 tall by 8 3/4 inches wide. 144 pages, over 100 black and white and color photographs. Full color artwork and submarine cutaway views. Includes an index. Title page inside the front cover has an inscription by the former owner.