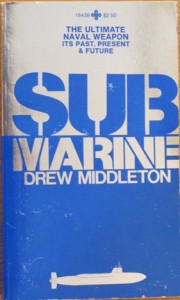 “SUBMARINE” The Ultimate Naval Weapon –– Its Past, Present & Future. By Drew Middleton. The history of the submarine, from its early beginnings and use in naval battles, through two world wars and into the atomic age. The author takes his readers through a colorful and dramatic chronological account of how the submarine came to be and its usage in the early days. Follow the Germany’s great successes in World War I and their dramatic re-arming in World War II. Includes historic information on American, German, Japanese and British subs during each war and into the nuclear subs of today. Paperback edition, 249 pages, 61 black and white photos, countless diagrams, illustrations and an index, no maps.