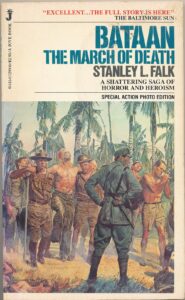 “BATAAN The MARCH of DEATH” By Stanley L. Falk. In the spring of 1942, the Japanese 14th Army overran Bataan Peninsula on the island of Luzon in the Philippines and captured 78,000 American and Filipino troops. Almost immediately, a curtain of silence settled over Bataan, concealing from the rest of the world the grim fate of the thousands of prisoners who died during the infamous “Death March” of Bataan. A terrifying account of torture, barbarity and humiliation, this is the first book to tell the whole story of one of the darkest episodes of the Pacific War and possibly World War II. This is a first edition 1982 Playboy Paperback. 256 pages, 8 black and white photos, 1 map, appendix and index.

Bataan The March of Death