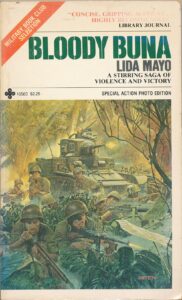 “BLOODY BUNA” By Lida Mayo. The battleground was a primitive wilderness of towering mountains and steaming swamps. Plunged into the worst possible human conditions was a group of raw American and Australian infantrymen. Their impossible mission was to recapture northern New Guinea and thwart the Japanese invasion of Australia. Burned by the sun, drenched by tropical downpours, they pitted themselves against expert enemy jungle fighters for seven grueling months. Here is the amazing story of the courageous men who beat the odds and turned a would-be slaughter into a major Allied victory. First, 1979 Playboy Press Paperback edition. 224 pages, 32 black and white photos, maps, no index.

Bataan The March of Death