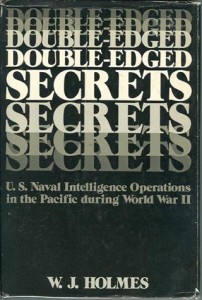 “DOUBLE-EDGED SECRETS” U.S. Naval Intelligence Operations in the Pacific during World War II. By W. J. Holmes. Foreword by Daniel K. Inouye (U.S. Senator from Hawaii). From the author of the great World War II submarine book, “Undersea Victory” comes, “Double-Edged Secrets.” The master game players who beat the Japanese at their own game. Now it can be told, the incredible true story of the intelligence operation that won the war! Find out how and when the top-secret ‘Ultra’ code was conceived. Every U.S. submarine in the Pacific fleet received an Ultra, but only the skipper could de-code the covert messages. 1979 Hardback edition with dust jacket (NOT a “book club”). 231 pages, 25 black and white photographs, 9 maps and an index. Two, large maps of the Pacific Theater inside front and back covers.