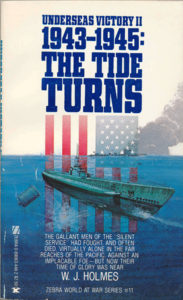 “UNDERSEAS VICTORY II”  By W. J. Holmes. Two-part Paperback edition, documenting the outstanding efforts of American submarines during World War II. During World War II Homes, a former submarine officer, served on the staff of Admiral Chester Nimitz in the Combat Intelligence Unit. He also wrote the book “Double-Edged Secrets.” Holmes starts his impressive books with submarine action just prior to the Japanese attack on Pearl Harbor in 1941. He then takes you through the entire U.S. sub conflict in the Pacific, ending with the official Japanese surrender in September 1945. Any edition of “Underseas Victory” is a very difficult to locate.

Part II “1943-1945: The Tide Turns.”  The gallant men of the ‘Silent Service’ had fought and often died, virtually alone in the far reaches of the Pacific.  Against an implacable foe–but now their time of glory was near. Zebra Paperback edition 271 pages, no maps, photos or index.