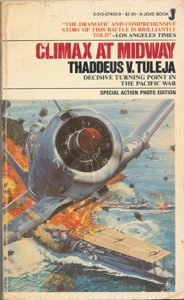 “CLIMAX At MIDWAY” By Thaddeus V. Tuleja. The dramatic and comprehensive story of this battle is brilliantly told. June 1942. If the Japanese could take the Midway atoll and destroy the American carrier strength, the Pacific would be theirs. But if the United States could hold Midway, the march to ultimate victory over Japan would began. Fresh from their victory at Pearl Harbor, the Japanese have swept much of the Pacific into their iron net. With superior numbers in naval power taking Midway was in the favor of the Japanese. For the American’s the battle for Midway was more than a tactical victory; it was the first defeat for the Japanese Navy and the turning point of the Pacific War. 1983 Paperback edition. 248 pages, 18 black and white photos, maps, appendix and index.