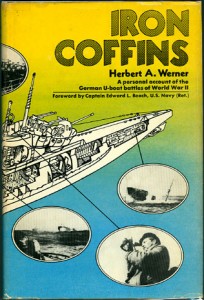 “IRON COFFINS” A personal account of the German U-boat battles of World War II. By Herbert A. Werner. Foreword by Captain Edward L. Beach, USN (Ret.). During his five years with the German Navy in World War II, author Herbert Werner served aboard five different U-boats; U-557, U-612, U-230, U-415 and U-953. As an ensign, then executive officer, and finally a captain, Werner was one of the few who survived to tell the true story of the U-boat war. The author traces the triumphant years during 1941 and ‘42––the crucial campaigns of 1943 and the final years of destruction in 1944 and ‘45. An excellent book that tells the real story of what it was like to serve on board a fighting U-boat––and live through the experience. 1969 Hardback (Book Club) edition with dust jacket. 364 pages with 76 black and white photos, one map and a U-boat diagram. Large maps of the Atlantic also appear inside front and back covers, appendix and glossary, no index.