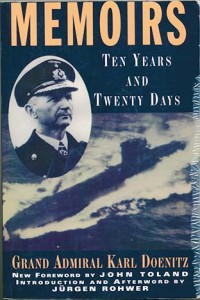 “MEMOIRS: TEN YEARS And TWENTY DAYS”  By Admiral Karl Doenitz. New Foreword by John Toland. Introduction and Afterword by Jurgen Rohwer. A former World War I U-boat commander, Karl Doenitz became the leader of the dreaded German U-boat campaign in World War II. In his book, Doenitz tells the true and fascinating story of Germany’s aggressive submarine war against the Allies. His “wolf-pack” tactics resulted in a handful of U-boats sinking 14.5 million tons of ships and nearly deciding the Battle of the Atlantic. In a clear firm style he discusses the planning and execution of the U-boat campaign; the controversial sinking of the liner Laconia; America’s “neutrality” before its entry into World War II; the 1944 Normandy invasion; the July 1944 bomb plot against Hitler; his encounters with Admiral Raeder, Hermann Goering, Albert Speer, Heinrich Himmler, and Adolf Hitler; as well as his own brief tenure as the last Fuhrer. Admiral Doenitz lost both of his sons in World War II. His youngest, Peter, went down with his submarine, U-954 in 1943. His older son, Klaus died in 1944 on patrol with his torpedo boat, S-141. Upon Hitler’s death in May of 1945, Karl Doenitz takes over as the new leader of Germany and negotiated their surrender. He was sentenced to ten years in prison by the Nuremburg Tribunal in 1946 and eventually released from prison in October 1956. Karl Doenitz died on Christmas Eve, December 24, 1980 at the age of 89. Softbound edition (now out-of-print). 520 pages, 18 black and white photos, maps, charts and an index. Front cover has a curl on the edge and some finish separation as noted in the above book photo. Inside pages and back cover are nice!